A local derby was played out at the Valley this evening. Ventnor Blue were invited to bat first and reached a credible 69-4 after 12 overs. Oliver and Nathaniel finished with strong bowling figures. In response, Ventnor Gold’s  top order made a strong start with Oliver Cheeseman retiring on 26 after just three overs.  Nathaniel and Thomas secured the victory with Ventnor Gold winning by 5 wickets. The win takes the team to joint top of the table with Ryde. To be honest the actual winner was the ‘spirit of cricket’; with 13 boys and girls representing the club with pride and all contributing to a very enjoyable evening.  Team photo attached along with a photo of the toss. Many thanks to Toby Noyes for Umpiring this evening – great to see the older lads supporting the Colts. 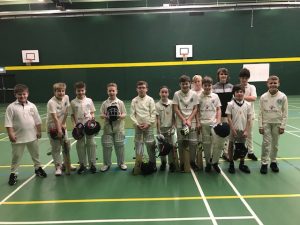 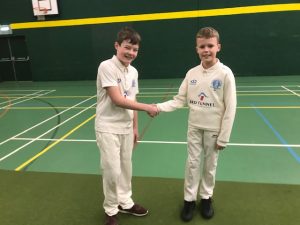 A superb knock of 28 from Joseph Hill secured Ventnor Blue their first win of the season against Cowes. Asked to bat first, Cowes reached 90 – 0 largely helped by some quite wayward bowling….  In response Joseph kept a ‘cool head’ and guided the team home. 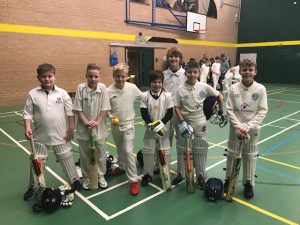 Week two of the indoor league and another win for the Gold team. Jess Glover’s 3 wickets took the ‘champagne’ moment of the evening. Praise also to Nathaniel Wells and Stan Smith for very solid performances with both the ball and bat. 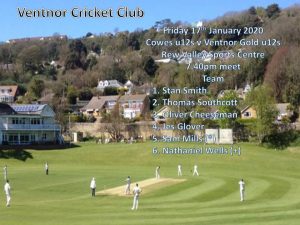 An impressive opening partnership between Luis Jones-Arnold and Joseph Hill (26 and 22 respectively) were the stand out performances when our Under12s Development Squad played a strong Ryde contingent at Rew Valley last night. Invited to bat first, Ryde reached an impressive 152 off their 12 overs with Iain Hayles and Harry Everard hitting 36 and 38 respectively. In response, our opening pair played well but couldn’t keep pace with the run rate required against some very tight bowling. Ryde came out on top by 62 runs. Next match is on Friday 24th January against Cowes CC 6pm start at Rew Valley. Well done to Luis Jones-Arnold, James Curtis, Joseph Hill, Bradley Baker, Alfie Cheeseman and Sam Mills. 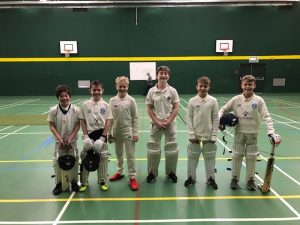